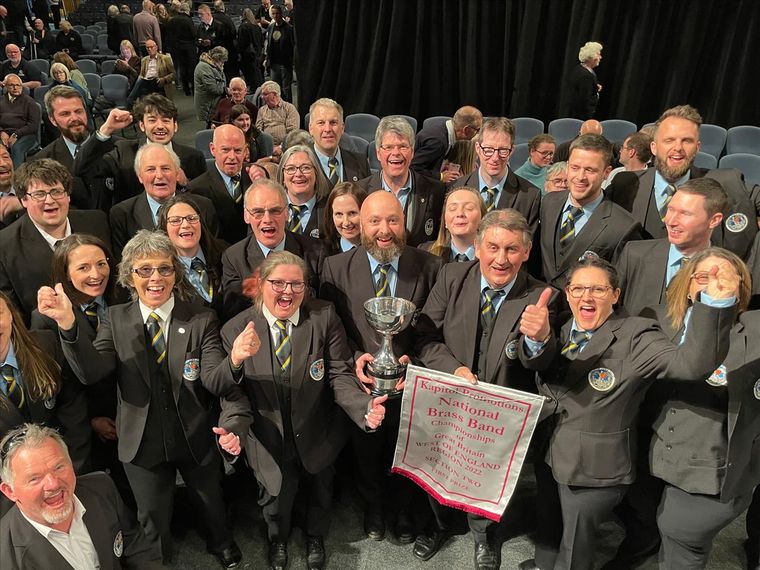 Members of Helston Town Band returned in high spirits on Saturday evening following the news that they had won the Second Section of the 2022 West of England Regional Championships.

Under the baton of their professional conductor, John Berryman, and attending their first competition since the Covid outbreak, the band travelled to Cheltenham Racecourse, where adjudicators praised them for their performance of the late Cornish composer, Goff Richards’ The Aeronauts.

The band was told: “An excellent performance all round. Well balanced, rhythmic detail and dynamic contrast a plenty. Well done all soloists and great control, musical director. Thank you.”

It was a special day for the band, as it was their first competition since the outbreak of Covid, following a nervous return to outdoor rehearsals in the summer, after a considerable period without meeting.

The win puts the band back in their rightful place as, having made the difficult decision to withdraw from the Regional Championships held in March 2020, for Covid safety reasons, the band had unfortunately been relegated to the National Second Section – making their latest success and promotion back up to the First Section even more richly deserved and fitting.

Musical director Kevin Johns has worked hard to bring the band back up to a good standard, but has faced struggles. Just three weeks ago the band had to shut down for ten days, due to a Covid outbreak amongst its ranks, following a Sponsored Blow.

It was only a couple of days before the contest that the band finally had a full rehearsal, where all players were present.

Messaging the band following the win, a delighted Kevin said: “I can’t emphasise enough how proud it makes me feel to think how well we played today. Well done to everyone. Onwards and upwards.”

Thanking Kevin and citing the band’s success as a testimony to his relentless hard work as musical director, the band’s chairman, Ben Curnow, said that he was still flying high after Saturday’s success, adding that it was one of the best days he could recall and a fantastic return to proper banding with the band family.

He also thanked John Berryman, who he said had become a real friend to the band, along with The Godolphin Club for allowing the band to use their premises for their rehearsals, and all those in the town who continue to support the organisation, helping it to flourish.

The band now has an invitation to attend the National Finals, back at Cheltenham, in September.